After a few days eating and drinking our way around Porto, we took the train down south to Lisbon. We arrived to a beautiful blue sky, sunny afternoon so after dumping our gear at our Airbnb we headed straight out to Belém on the tram. Belém is probably best known for two things – the Belém Tower and the Pastéis de Belém cafe which sells those delicious custard tarts. We headed straight to the Tower and enjoyed the relaxed vibes, there were live musicians in the park so we took some time out to sunbathe and read. We casually walked back towards Lisbon checking out the sights along the water and after seeing the extensive line at the famous Pastéis de Belém we flagged the crowds and sought out some cocktails (mocktails for me!) back in the city. In the evening we managed to nab a spot at the popular wine bar By the Wine – known for their petiscos (small dishes). The food and wine were really tasty, and they even had several non-alcoholic wines which I was very excited about!

On Easter Sunday we walked A LOT. After Andrew’s morning run and my sleep in, we headed off for the day fueled by a healthy breakfast from Hello, Kristof. We stopped by Calhariz for that quintessential Lisbon tram shot and managed to catch the tram just as it was about to leave. The plan was to head up the Santa Justa elevator, but again the tourist lines were just way too long and Andrew is not a patient man when it comes to queuing! So we flagged it and made our way up to the more impressive (and highest) viewpoint at Miradouro da Nossa Senhora do Monte, passing some great street art on the way. Lisbon is known as the city of seven hills so you can certainly get a great workout climbing your way up and down in search of the best viewpoints. 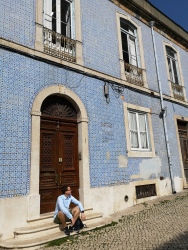 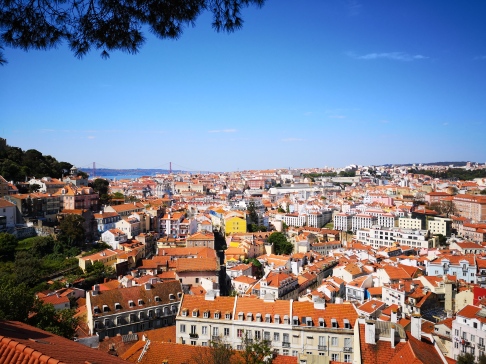 Down and up another hill we purchased tickets to get entrance to the Castelo de S. Jorge – Lisbon’s most famous castle. We spent a couple of hours here soaking up the history and the views across Lisbon city. After a much-needed break at the terrace bar Portas Do Sol, we saw the (closed) Cathedral and ‘Lisbon’s Gateway’ the Terreiro do Paço – the square and the arc. During this trip, we decided to take things pretty easy, by not cramming too much into one day. I think we even managed to get in naps most days. So after a lot of km’s under our belts we headed back to our Airbnb for a mid-afternoon siesta. 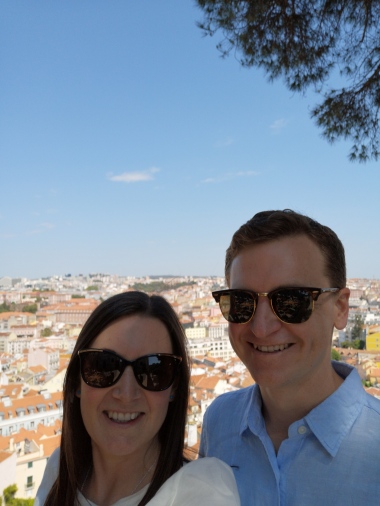 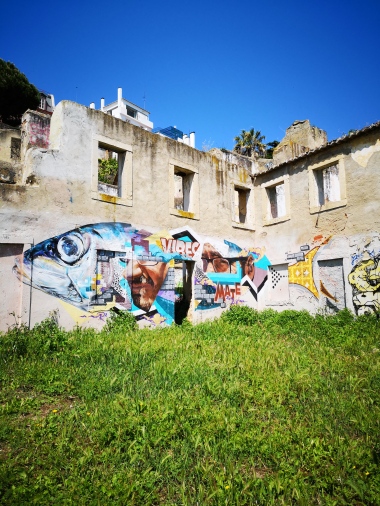 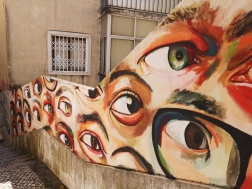 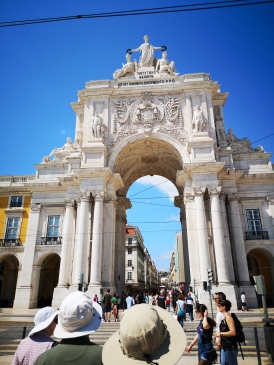 In the evening we took the bus to Eduardo VII Park as I had heard it was a cool place to watch the sunset from – also a legit picnic spot if you fancy. Though it was a bit windy so we decided on an early dinner instead at ZeroZero, a pizzeria in the heart of the ‘trendy’ Príncipe Real. I spotted some cool shops around this neighbourhood and it looked like there was a great bar and restaurant scene, so wish we had more time to check it out. 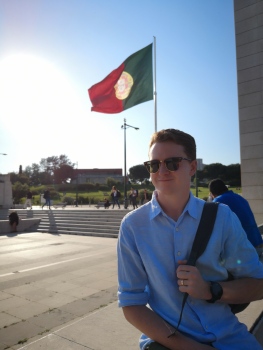 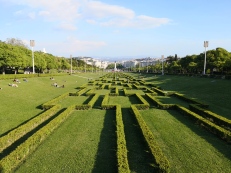 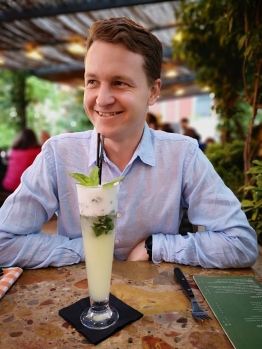 On our third day in Lisbon, Easter Monday, I dragged Andrew off to Sintra – the perfect day trip from the city. It’s super easy to get to via train, which leaves regularly from Rossio station and takes around 40 minutes. I had read plenty of blogs before planning our day to ensure we made the most of our time in Sintra and tried to avoid the worst of the crowds. However, that all went out the window when the first bus we hopped on, took us directly to the Pena Palace, which I wanted to avoid first thing in the morning. Alas, we joined the queue (Andrew’s favourite travel pastime) and made our way painfully through the inside of the Palace. You have to follow a roped off, one-way path through the Palace, and as it was so busy we were just shuffling along stop-starting. It wasn’t enjoyable at all and the outside of the Palace and the surrounding gardens were much more pleasant. So in hindsight, we should’ve just skipped going inside altogether! Lesson learned. Andrew was not in a good mood at this point! 😀 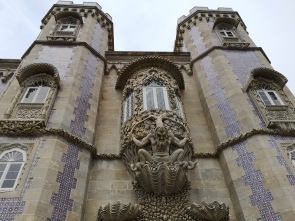 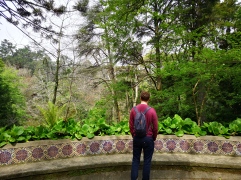 Next up was the much less crowded (phew!) Moorish Castle which we were able to walk to from the bottom of the Pena Park. It isn’t so much of a castle these days but an impressive fortified wall which you can walk all around. Unfortunately, the foggy clouds had settled in by the time we arrived so the views weren’t as good as they could’ve been. Back down in Sintra town we found a great tapas restaurant, Tascantiga, in the back alleyways, away from all the tourist traps. 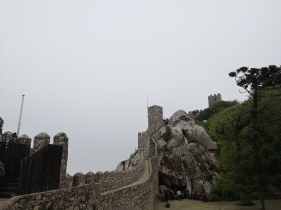 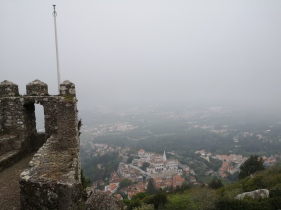 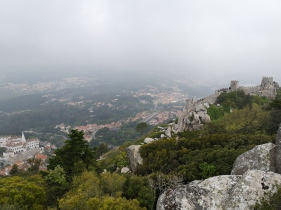 Our final stop was definitely the highlight of the day – Quinta da Regaleira. This UNESCO World Heritage Site is a magical labyrinth of gardens, grottoes, tunnels, wells, detailed structures and hidden gems. Built in the early 1900s, the property belonged to the aptly named ‘Moneybags Monteiro’ who commissioned Italian architect Luigi Manini to build him this bewildering place. You could probably spend a good half day here exploring every hidden corner, it was such a fun place to get lost in and highly recommend you don’t miss this treasure!

On our final day, it was pretty wet and miserable. We had a late breakfast and stocked up on some custard tarts from Manteigaria in the TimeOut market – still not quite sure they bet the ones from Porto! And then it was time to bid farewell to the wonderful long weekend we had spent here in Portugal. We loved both Porto and Lisbon for different reasons. And even though Lisbon is getting more and more touristy by the day I would love to return again for another foodie filled weekend of exploring in the sunshine. 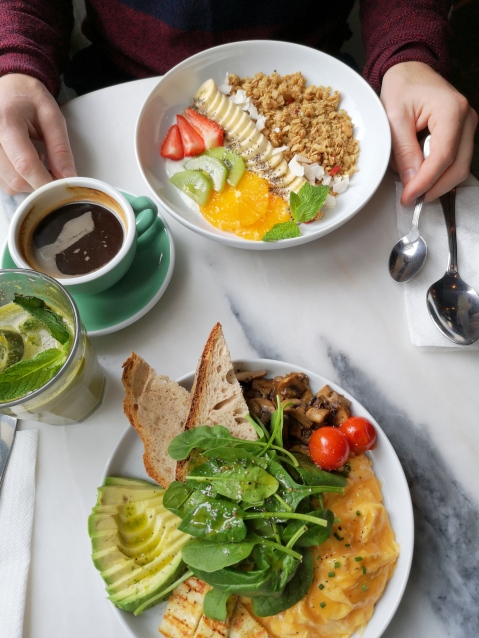 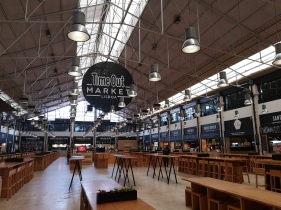 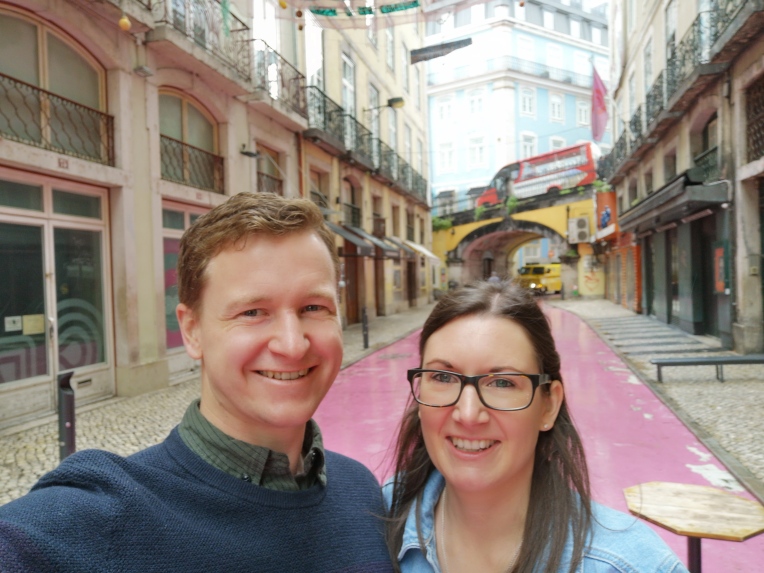 P.S – I’m playing catch-up on my blogs. Since finding out I was pregnant I have fallen quite behind on my updates! Maybe I’m trying to stretch out the holidays in my mind.

I still have upcoming blogs to write covering our foodie weekend in San Sebastian, our amazing adventure in Jordan and Tel Aviv, a weekend in the south of France and a road trip around Cornwall to come! Hope this baby gives me enough time to write them all 😀

One thought on “Lisbon and Sintra”