I’ve been a bit quiet on the blog as of late as a few other things have taken priority over travel – a 2-week trip home, moving into our own flat (hallelujah!) and Andrew’s endless life of study. But with the weather warming up and the travel bug itching I booked us in for a weekend of hiking in the Peak District (surely Andrew could fit in some study on the train!).

Andrew and I vowed to not only use London as a base for travel around Europe and further afield but also to see the rest of the UK, which has so much on offer on its very own doorstep. Though so far we haven’t done a lot of travel in the UK – Bath, Brighton, Pembroke – Wales, Edinburgh, Islay, Botesdale are just a few we have ticked off the list. So I’m going to try make more of an effort to travel within the UK this year – especially since we have already used most of our annual leave and short weekend trips are definitely on the cards.

The trains in the UK make travelling pretty easy and I highly recommend buying a Railcard to save 1/3 off trips as a couple. Our return tickets to the Peak District were just £55 all up.

So off we went on an early Saturday morning, via Sheffield where we had an unexpected longer stop, so we had a quick explore of this student city. We saw the sights – some nice water fountains and the town hall then it was back onto the train to our next stop at Hathersage. 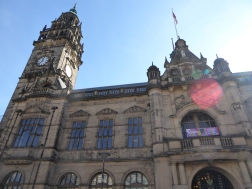 When booking this trip it was a bit difficult to find accommodation that a) was walking distance from a train station and b) wasn’t too expensive, but luckily I landed a great Airbnb in Hathersage.

Hathersage is a quaint English village with historical associations to Robin Hood and is also the starting point of the Stanage Edge loop hike. Stanage Edge is the longest gritstone edge stretching out along 6km and is a famous spot for walkers, mountain bikers and rock climber’s. As we neared the rock face we were surprised to see just how many people were dotted along the cliffs. 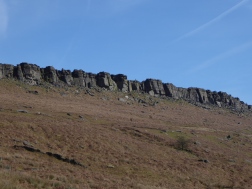 Walking through the countryside Andrew and I both started to laugh about the lack of “peaks”. I joked that we have bigger peaks in our backyards back home. Coming from New Zealand I think we are quite use to driving through rolling hillsides similar to what we saw here. Though when we got to the top of the cliffs the views were quite lovely and it was also such a nice feeling to get out of the hustle of London.

The following morning we took the train a couple stops west to Edale where we took on the Kinder Scout hike. This is probably the most well-known in the Peak District and is the highest peak in the area at 636m. We absolutely lucked out with the weather and actually were a little bit sunburnt from the previous day (damn our pasty London skin). I had read that just the weekend prior walkers had found themselves in snow along the peaks of Kinder Scout. The weather can turn very quickly up there and it’s recommended that you’re well prepared.

The walk starts off in rolling farmlands until the path hits Jacobs Ladder – probably the hardest part of the walk – I hate stairs! But once at the top we enjoyed great views over the valleys below, you can even see out to Manchester from here. Onwards we hit the Kinder Downfall a 30m waterfall which flows over the gritstone cliffs. Here we found a comfortable spot out of the wind for our packed lunch. 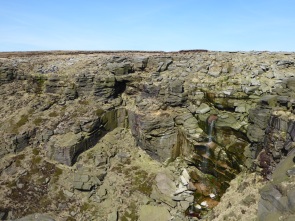 Up until this point the instructions we had were quite clear but after heading upstream into the peaty bog we got a tad disorientated. We ran into another couple from Manchester, who were reading the same instructions, so were equally confused. We were of the “she’ll be right” attitude while the guy seemed to be stressing out a bit. We stumbled upon a group of four young boys who were also a bit lost even though they had a compass. Eventually, we got our bearings as some landmarks came into view and we came across the Pym Chair.

After this point it was a downhill journey back down to Edale, which was pretty rough on the knees! We enjoyed a well-deserved beer and fries at the Old Nags Head pub before heading back to reality.

It was such a nice chance to get out into nature, explore the countryside and have a bit of a digital detox for the weekend. We walked about 5 hours each day and I definitely felt the effects on the Monday. I’m looking forward to more trips throughout the UK this year and definitely keen to explore more through hiking – which is so rewarding.

2 thoughts on “The “Peak” District”